Brief Overview of My Experiences with Stocks

My first foray into the stock market was after reading the books of the popular writer, Jim Cramer. And it resulted in buying several penny stocks which were developing “revolutionary” new products. They did rather poorly and I decided to try buying stocks of more well-known companies, like Goldman Sachs and some others which I do not remember. This was in 2007-8 and the tiny gains from my small investments were financially negligible; however, it was an experience.
My knowledge of markets began to change as 2008 progressed into 2009 and I gained experience trading stocks. I lost interest in Cramer and found the work of Benjamin Graham to be far more fascinating. While in high-school I was fascinated by Benjamin Graham’s record of success and his value investing approach to choosing investments. My interest continued as an undergrad in college; I remember reading all of Graham’s articles while sitting through accounting class. Reading Security Analysis more than twice, I attempted to put my newly learned skills to the test. The potential to find muddied gems hidden from view by the dirty coating applied by “Mr. Market” spurred my desire to master the art.
There were a few stocks which I had bought at various times during the period of 2008-9; they fell and rose with the rest of the market during the roller coaster ride from which many people still feel dizzy. One was Reddy Ice, which ended up bankrupt. However, I did not have much money to invest until after the downturn. In this favorable condition I began to search through hundreds, if not thousands of stocks. The final list of suitable candidates fitting Graham’s criteria included a steel producer called Keystone Consolidated Industries. Owned mostly by Harold Simmons’ Contran, the stock had a market value of $36 million. Having a pension fund the size of Texas and a decent sized steel operation (around $500 million of sales per year), I felt this was the best choice. It turned out to be a wise investment, as I finally liquidated my position when Contran finally purchased all the shares at around $9.00. Even at this price, the company’s market value was only around $100 million — a real bargain for Contran, since the pension fund had around $700 million in assets at the time and only $350 in NPV of pension obligations; not to mention the profitable steel company. Carl Icahn, the only other large shareholder, said not a word at the paltry price of $9. To this day, I still believe a fair price should have been at least $20 per share. Despite most of the value being reaped by Contran and Simmons on this transaction, I did benefit.
After this success (and the passing of three years), I found that I lacked the same fascination with Graham as I did a few years before. I think my interest waned as I witnessed “Mr. Market” in action and I realized first hand that market sentiment played a huge role in price determination. “How could people not see the value?” I always asked myself. “Was this a flaw in Graham’s strategy?” And it was precisely this question which led me to realize that people and markets are far from efficient. Graham’s method is only successful for a large diversified portfolio of undervalued stocks. In fact, I really think that value does not exist as an absolute quantifiable truth; value only exists as a social relationship between commodities as Marx writes in Das Kapital. And by doing so, its expression is subject to the whims of human emotion. It is with this perspective which I began reading about the behavior of traders and markets.
Today I am surprised to learn that Harold Simmons passed away in December of 2013. He was a clever man who grew a few thousand dollars into billions.

Let’s say that you have started an IRA or some sort of long term retirement account. One strategy would be to invest 100% of your money in an index fund which follows the S&P 500. This would give you around 9 – 11% annual average returns over 50+ years. However, you will notice that there are several times throughout the life of the account in which the index suffers massive losses.

To counteract these loses it would be wise to find another index, such as a short term bond fund, where you could temporarily store your returns; then, once the market has crashed, you could invest these funds back into the stock market.

This strategy is a modified version of the one suggested by Benjamin Graham in The Intelligent Investor. His strategy was to always be in a range of 25-75% in a bond and stock fund. In other words, never have your portfolio more than 75% or less than 25% in either bonds or stocks. Then, depending on whether you “felt” the market was too optimistic or too pessimistic you would adjust your ratios accordingly. I feel that this idea of optimism and pessimism can somehow be quantified and developed into an algorithm.

Take two index funds: the S&P 500 index fund and a two year bond fund. Both have minimal expenses (Vanguard funds). The strategy is simple. Begin with 70% in stocks and 30% in bonds and wait 24 months. Now, check the past 24 months. Is there a gain or loss of magnitude greater than 50% in the S&P 500 index during this period? If true, then readjust your portfolio. If it is a gain, then bring the portfolio back to 70% S&P 500 index and 30% bond fund. If it is a loss, then bring the portfolio to 95% S&P 500 and 5% bond fund. Repeat this process every 24 months. Also, make sure you continue to make monthly deposits 50-50 into the stock and bond funds.

Performing this strategy with certain adjustments in these ratios will allow the investor to achieve better than market annual average returns for 50+ years. I am currently trying to work out the exact results and best parameters of this strategy.  I believe these returns will be even better depending on the amount invested per month.

After reading the Intelligent Investor, I decided to read Security Analysis, both by Benjamin Graham and David Dodd. Warren Buffett mentions repeatedly that this is one of the best books on investments.  I have read the book twice and I agree with Buffett. 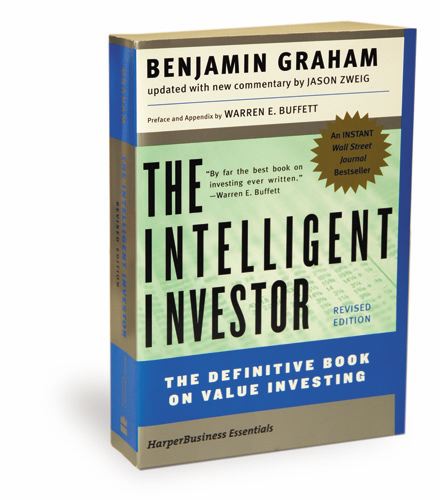 The Snowball: Warren Buffett and the Business of Life – Alice Schroeder

After reading many books and articles by Benjamin Graham, I decided to read about the infamous Warren Buffett. The Snowball: Warren Buffett and the Business of Life provides a lengthy and detailed account of the life of Warren Buffett. Although it offers no direct advice on investments, the reader will gain insight into the mind and lifestyle of one America’s greatest financial minds.

After reading the biography, I believe that his success lies in no specific investment strategy.  It is his overall outlook on life and common sense approach to investing which allows him to avoid the extremes of risk. (ISBN-13: 978-0553384611)