Scale, by Geoffrey West, is a thought provoking book about coarse grained quantitative network theories which concern the entire human species and its interaction with the environment. Although verbose — as I think the intended audience is upper high school and entry-level college — it is clear in its depictions and explanations. This book is an important summary of really profound work and research performed at the Santa Fe Institute. And it is a great introduction to understanding power laws and scaling in biology and network topologies.

Hidden Forces, hosted by Demetri Kofinas is an nice set of interviews with various people on topics including: finance, complexity, mathematics, and cryptocurrencies. I struggled listening to some of the interviewees because I did not agree with their ideas or conclusions; but I guess it is good to have conflicting opinions in order to encourage debate in the comments and to help review one’s own opinions and understandings. Regardless, Kofinas provides a highly accessible medium through which advanced ideas can be grasped.

I first ran across Hidden Forces while listening to the interview with Ray Monk about philosophical mathematics. Monk’s narration on the work of Frege, Russell, Whitehead, Wittgenstein, and Gödel is excellent – by far one of the clearest and easiest to grasp. It was learning about these paradigms and paradoxes of mathematics via Hofstadter’s famous book which led me to start this website.

Order can exist without a hierarchy, yet I constantly confront the word anarchy in contexts which assume its manipulated definition of disorder. This association degrades the ideas of political anarchists. To remedy this issue, I propose a new word:

Autocosmocracy – a form of society in which the political relations between its members, without the aide of any hierarchical institution, continually gives rise to a self-organized society. A continuously existing society without a higher power structure; a system where authority lies in the absolute freedom of the individual. All members are autonomous agents.

The world of the biologist is filled with organisms which are self-organized. In the natural sciences there are numerous phenomena in which order arises out of agents acting autonomously. Is not man himself a biological creature in the physical world?

Imagine a hypothetical situation where the form of civilization is an autocosmocracy — all individuals completely autonomous, bound by no institution. I would postulate that inevitably, after a certain number of generations, the civilization would form groups due to scarcity; and that these distinct groups will form their own government. These new groups will throw away the autocosmocratic forms and create novel political frameworks in order to achieve various goals. For instance, there is great dominating strength in having a mass of brutish men who will obey all commands unquestioningly. In other words, in an initial state of complete freedom and liberty, humans will group and band together. It can be shown mathematically that this will be the equilibrium state. Those individuals who fail to join a group will be out competed or destroyed by those who do join a group.

A similar situation occurs in the distributed cryptocurrency mining networks. This system, which is initially distributed with all individual miners acting autonomously, inevitably transforms into a network of groups due to competition and scarcity. So the natural question arises: how to prevent the formation of such groups in the presence of scarcity? Or is it a better question to ask how to eliminate scarcity?

In terms of Plato’s cave of shadows, it would be a society in which all members are able to discover the source of the shadows. All members would exist as philosopher kings.

Steps to an Ecology of Mind – Gregory Bateson

The papers, essays, and lectures contained in Steps to an Ecology of Mind showcase Gregory Bateson’s incredibly unique perspective. Due to the wide range of discussion within this collection, it is very difficult to write a concise summary. There are a few points which made a lasting impact in my mind.

He explains the levels of learning and how the animal mind can “learn about learning” and “think about thinking”; concerning humans – they can reach a third and possibly fourth level in this learning recursion hierarchy. He discusses this in the context of various subjects: anthropology, psychology, evolution, information, ecology, cybernetics and epistomoglogy in general.

He emphasizes that western science should adjust the way it thinks about relationship and form and discusses how these are relavant to the study of matter and energy. He questions the western conception of mammalian emotions, aesthetics, and the ego-self. On several occasions I found myself with the desire to re-read Godel, Escher, Bach by Douglas Hofstadter. Both books I think contain some overlap in their treatment of information and the mind. Overall, Bateson was an incredible thinker and you will improve your intellect by reading this collection of work. 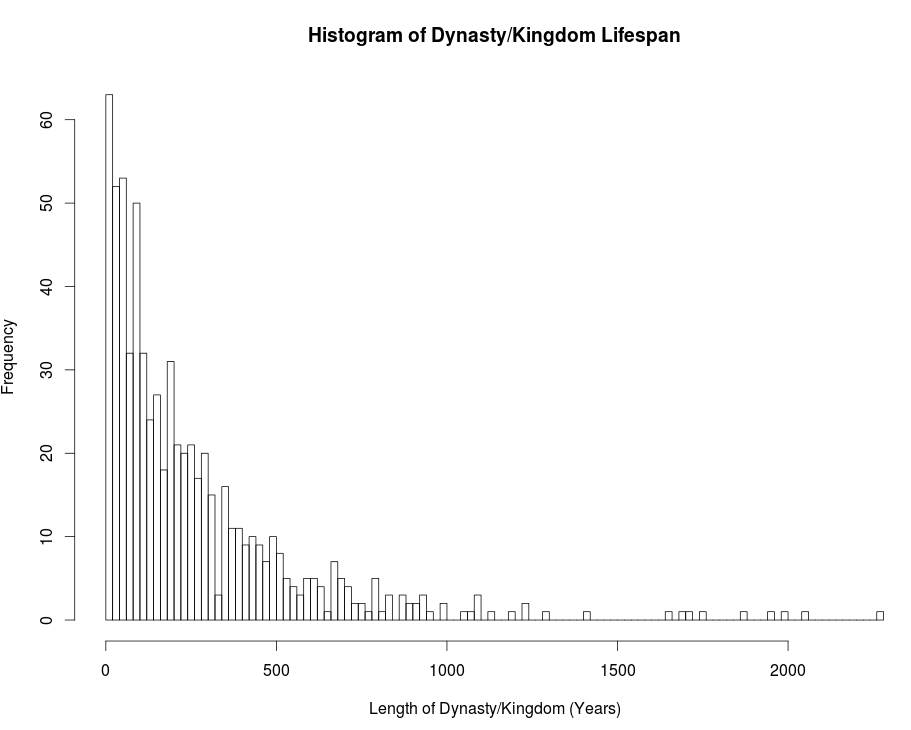 Do there exist studies on the distribution of the lengths of kingdoms and dynasties —  distinct political entities — since the 3rd millennium B.C.E.? It seems likely that someone has already studied this topic, but I can not find any papers online. To explain, I have included a file, here, containing the beginning and end dates of about 700 distinct social groups since the dawn of recorded history. It was complied from various Wikipedia pages. I do not doubt that the data is not very reliable, however, graphing the histogram of these lengths, see Figure 1, would provide at least a rough idea of their distribution.

It does seem that a nice distribution curve exists which models the data. The distribution seems to take the shape of a power law at first glance. Doing some work in R, I found that a power law with one set of parameters fits the tail nicely but fails to fit the first half; and vice versa, a power law with a different set of parameters fits the majority but not the tail. My hypothesis is that a power law with alpha equal to 3 may be the best fit. This is a prediction based on the lectures of Geoffrey West, in which he explains that most biological systems exhibit power law distributions with alpha in the 2.5-3.0 range. However, as seen in Figure 2, this does not seem to be the correct range for alpha if a power law is the best fit for this preliminary data.

The tail of the distribution does not fit well with the parameters shown in Figure 2.
I would venture to guess that the data may not be reliable in the displayed tail region. This would suggest that the data may need improvement in the portion where kingdoms and dynasties exist for longer than 200 years. The data I compiled, may of course be missing many kingdoms and dynasties. I believe that my sample is biased, due to these missing kingdoms and dynasties.
To improve this rough sketch of the distribution of kingdoms and dynasties, a highly systematic method must be devised to correctly measure the length of time of existence for any dynasty and kingdom. Also, this method must consistently be able to distinguish when a kingdom or dynasty begins and ends. The general idea is to measure the length of existence of a distinct political entity in a geographical region.
A sample must be obtained which is not biased. A dataset containing the population of all existing kingdoms and dynasties existing since the 3rd millinium B.C.E. would work best. Even so, this would be biased because it would ignore all the dynasties and kingdoms existing before that time.