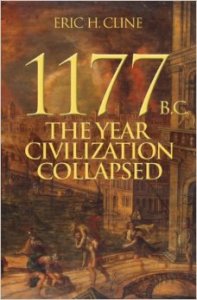 Eric Cline’s book, 1177 B.C.: The Year Civilization Collapsed, provides a scholarly summary on the rise and decline of the bronze age in the Mediterranean region. Citing a number of different reasons for collapse, I find the most interesting to be a complex systemic failure arising from a continuous wave of natural disasters combined with external attacks by “sea peoples” which the “global” system could not withstand. These shocks were applied to the ancient system at its peak, in terms of power and interconnectedness, which indicates that collapses seem to occur near peaks, not troughs, in societal wealth and prosperity. And several civilizations tend to disappear at the same time; much as species extinction tends to occur in clusters. Chinese dynasties, Mesopotamian cities, Persian kings, the Mongols, the Romans and countless other examples show the same pattern.

I am interested in seeing a frequency plot showing the number of states, governments, societies which last a given length of time (similar to here except with plots; the average tells us nothing about the shape of the distribution). And if no such plot exists I will try to create one. Collapse occurs time and time again in the history of humans and biological evolution. To me, this seems to indicate a natural law of growth which applies to all biological growth phenomena. And such a law has been mentioned by Robert Prechter and provides a basis for mathematical analysis.

The Power of Scientific Visualization

Why the Pharaohs Built the Pyramids with Fake Stones – Joseph Davidovits