Investment Fund with a Mandate

Would it be possible to establish a limited partnership which has the sole mandate to restructure the boards of public corporations simply for public welfare? Or is this idea just wishful thinking.

Most “activist” investors and funds are simply trying to change corporate boards for self-interest, their goal being to induce a new executive team to increase profitability, free cash flow, product diversity, etc… Most likely the purpose of these activists is to make changes which will result in a large long term gain with a nice 15% tax rate. But, what I am suggesting has no goal other than to raise enough funds to accumulate an ownership stake which will allow a board take-over of a large corporation.

One of the interesting aspects of this fund would be that it’s goal would not be in any way to earn investors a profit. Thus, all contributions to join the partnership would be subject to complete loss. Any gains or losses would be given back or incurred to the donors after the mandate has been achieved. Once the mandate is complete, the partnership would be dissolved. This could take 1 year or 10 years depending on the situation in the corporation.

Starting anew would ensure that any managers would not be corrupted. Fees would be minimal. No one managing this fund would make any more than a living wage. However, there will be legal and other such fees which are unavoidable.

For instance, if 10 million people invested $3,000 in this partnership, the total of $30 billion would be sufficient to slowly accumulate a controlling interest in the corporation. Once the controlling interest is achieved, the board of directors would be replace by the desired men and women. This new board would then replace the executive team to create a new culture for the corporation to ensure the mandate is achieved.

Anyway, let me know what you think… constantly trying to think of ways to improve/fix our existing system. 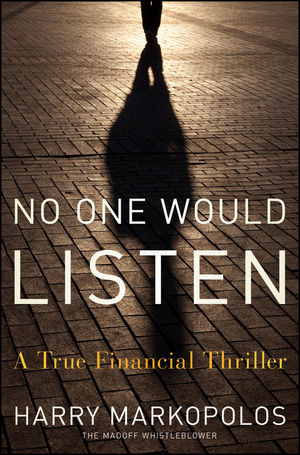 No One Would Listen: A True Financial Thriller – Harry Markopolos In No One Would Listen: A True Financial Thriller, Harry Markopolos, the financial fraud detective who studied Bernie Madoff’s questionable returns in early 2000, narrates the entire history and investigation of Bernie Madoff’s ponzi scheme — starting in 1998. I was shocked, as was Markopolos, on learning about the negligence and failure of the SEC on numerous occasions. The book provides a good summary account of the Madoff fraud and the people involved. It also provides important insight into financial fraud, reform, and regulations. 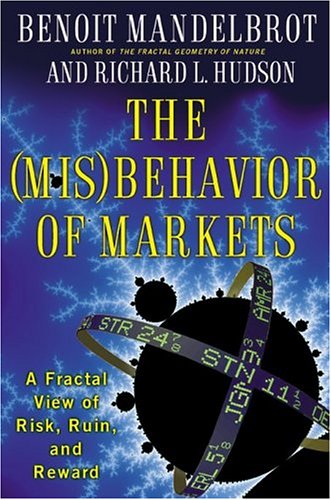 The Misbehavior of Markets: A Fractal View of Financial Turbulence – Benoit Mandelbrot I’ve been wanting to read The Misbehavior of Markets: A Fractal View of Financial Turbulence by Benoit Mandelbrot for a number of years. Mandelbrot helped to change the way people view financial market dynamics. This book is definitely a must read for people working in the financial industry. However, Mandelbrot was not the first. It is a little surprising that Mandelbrot did not talk in detail about the work of R.N. Elliott or Robert Prechter, among others, which I think complement Mandelbrot’s work on financial fractals. Patrick Harris wrote a short paper discussing whether Mandelbrot should have cited Elliott (link to paper).

To me, the idea of infinite memory processes is one of the most important concepts touched on by Mandelbrot in this book. It suggests that economists and traders should be developing models and theories which value the importance of price series and data going back decades. And it makes sense to me that people and prices do not change their fundamental behavior over extended periods of technological evolution. However, I suspect that organisms do change their fundamental behavior if the time horizon is thousands or millions of years. I am very curious to read more about Hurst’s studies of the Nile.

A big reason why it is so hard to fix and respond to environmental crises is the fact that societies lack a means to store ecological value in a monetary form. As a result, in the never-ending pursuit of growth and technological progress we rarely consider the growth and progress of other species. But how can we? Population statistics, ecological value, and other detailed data are rare or non-existent. We have very little quantitative data on the thousands of other species. And we don’t care. The average citizen can barely find time to consider the fate of the Rhino when he/she works 10 hours a day. We are stuck in fifth gear — moving full speed into the future despite the dire consequences of ignorance and a failure to act. The current relationship between humanity and the biosphere is reminiscent of parasitism or cancer. I just hope we are not yet in stage 4. Despite the reliance of our survival on other species, we continually threaten their existence — and indirectly our own.

The solution to the impending crises lies in a change of perception. The often quoted “survival of the fittest” ideology tends to cause people to forget about another important form of evolution — symbiosis. Cancer is the extreme version of “survival of the fittest” and parasitism at the cellular level. Cooperation through symbiosis however, is working together to get the job done (mitochrondria and the endosymbiotic theory). If we change the way we view nature, from “Man versus Nature” to “Man with Nature,” our problems will begin to vanish. The conception of the future will turn from a dismal apocalyptic world to one of harmonious mutualism. A symbiotic biological cooperation between our species and the other species of Earth, who are at our mercy, will forever change the course of history. The importance of symbiosis is becoming increasingly clear as a powerful survival mechanism in biological evolution and the future of homo sapiens may depend on its acceptance.

Brainstorming ways to establish a framework which intimately connects the economics of humans with that of their relatives in a symbiotic relationship, I believe one solution could be via the market. It involves creating a new asset class. By establishing shares of stock in species (or family/order) and having these shares trade in an exchange, the success of other species now becomes a potentially profitable industry for humans. At the same time benefiting the non-human species. Similar to humans trading shares of stock with theoretical values based on the work potential of organizations of labor producing members, the trading of species shares would be based upon the ecological value of biological organisms.

This Species Xchange would provide a means to store human labor potential (money) in the data collection, protection, monitoring, preservation, and development of any number of species. This funding would be initiated through an IPO for each species. I believe this would be symbiosis at its finest. Including other species in our financial decision making would fundamentally change the relationship humans have with their biological relatives.  By protecting the species humans rely on for ecological harmony, while at the same time providing them with a more “bio-diverse” basket of eggs to store their labor potential would, in effect, create a more dynamic and powerful investment system.

Since these shares would lack the legal power characteristic of corporate shares, the Species Xchange organization would guarantee the price per share. This guaranteed price per share would be calculated based on species reports published on a quarterly or semi-annual basis, similar to how corporations release 10K and 10Q reports. The calculation would be based upon various statistical and environmental attributes of the species, determined by experts, suitable for maintaining the harmony of the total ecological system. And this price could increase or decrease from quarter to quarter; depending on how the specific factors change. The only way the shares would be valueless, similar to corporate bankruptcy, was if the species went extinct — in effect providing a strong incentive to keep the species alive and prosperous.

The money raised in the IPO would go towards all manner of initiatives to fund and support the species. It would be managed by a group of people in a primus inter pares form of management. The goal of management would be to spend the money in such a way as to increase the value of the species in relation to all other species. This could include population measurement and control, biological research on the life cycle of the species, detailed studies on the role in the overall ecological network, etc…

For example, let’s say 100 million shares of Macropus Rufus are issued to the public. The IPO is priced at $20 per share. Thus, proceeds of $2 billion would go towards a fund established for the Macropus Rufus species. At the end of each quarter, a species report would be released detailing any changes in population, biological discoveries, and other details related to the status of the species. After each report, a new guaranteed price would be established by a set formula. Let’s say that new price is $22.50. Fast-forward through time and imagine a set of guaranteed prices: $22.50, $22.80, $21.00, $22.10, $25.00, etc… The set of guaranteed prices would form a set of lower bounds for the price series. The only reason an investor would redeem the shares would be in the event of an arbitrage if the price fell below the lower bound. However, it remains to be determined whether this would actually happen.

Perhaps all this seems silly, like something out of science fiction, and not feasible. Even though I would disagree, I think it is at least a step in the right direction. If more people can brainstorm practical ideas which join together humans and other species in a symbiotic relationship with current institutions, we may have a chance at preventing a catastrophic change in the biosphere. Harmony and balance can be restored with the right combination of creativity and institutional power.